Toulouse-Blagnac Airport mobile app has been released yesterday (8th of January 2015) on the Appstore (and will be released next week on Android devices). This is a great pride for APPSTUD, which has been chosen to drive the whole project. Here is the link for you in case:

The challenge was to understand the needs and wants of the target audience. Therefore, APPSTUD teams went to meet frequent travellers to identify their feelings concerning the Airport. They noticed that there was a difference between what the airport was theoretically offering and how the traveller was seeing it.

The frequent traveller is not necessarily techie but he owns a smartphone. Used to airports areas, he is demanding concerning offered services. He does not have much time, and he considers the airport as a useful but stressful location: come early, don’t be late, optimise the time and be conveniently able to work.

Thus, he comes to the airport with primary needs (check-in, go through custom, go to the boarding gate, board) and secondary needs (work, find a near parking close to the airport, buy something to eat, …)

The stress factor decreases the frequent traveler’s secondary needs which are seen a add value for them. The point is, how to optimise the primary needs time (represented in grey below) to spend more on shopping, having a coffee, etc (in green) ? 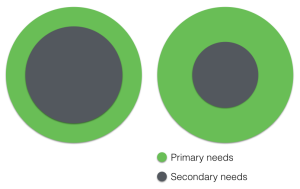 Can an app allow the frequent traveller to give priority to its secondary needs ?

Yes, by removing the Stress factor, and by bringing Pleasure

Ergonomy being major, APPSTUD decided to redesign the one initially thought to focus on : 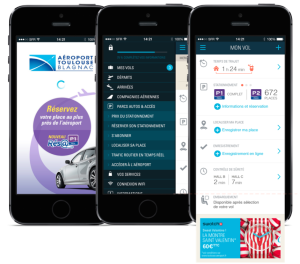 SCRUM methods have been chosen to bring remarkable functional results to each project iteration.

Concerning people involved, a 4 mobile engineers team plus a Scrum Master have been sought. 2 iOS and Android engineers supported by 2 back us engineers have led to the current design.

Being constantly in its users’ pockets, Toulouse-Blagnac Airport asserts his leadership in customer relationship.